“Sexual incompatibility can lead to divorce in and of itself but it can also be a factor in other leading causes of divorce. Aside from abusive behavior and marital infidelity, the rest of the causes of divorce in this list are considered no-fault grounds for divorce in New York,” the New York City divorce attorney says. 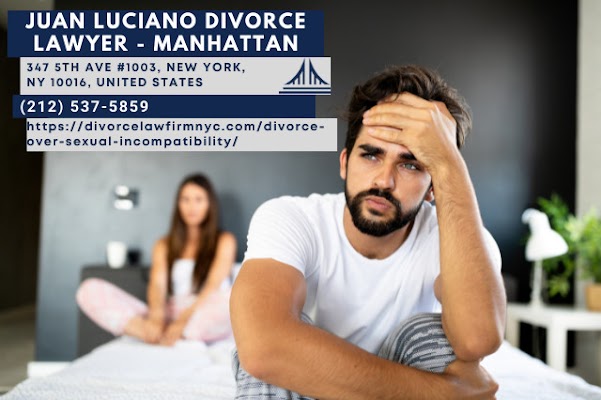 The lawyer adds that one of the leading causes of divorce in the US is marital infidelity or cheating on a spouse. In a study conducted by the Institute of Family Studies, 16% of people who are married or who have been married before admit to cheating. And in another study by the American Psychological Association, it has been found that up to 40% of divorces in the US are due to infidelity.

Attorney Juan Luciano says that another cause of divorce in the US is abusive behavior. Domestic violence often comes up in divorce cases, and one of its forms is spousal rape. Because people expect that sex is a result of being married, spousal rape often flies under the radar. However, consent is still a very important factor in a relationship.

In the article, attorney Luciano says, “When spouses find themselves sexually incompatible, they typically don’t immediately consider getting a divorce. Most couples undergo couples’ therapy or counseling and sex therapy and find that it helps their relationship. However, if you have tried other fixing the issue of being sexually incompatible with your spouse, it may be time to move on from the marriage.”

Lastly, the divorce lawyer explains that it’s important to seek the guidance of an experienced lawyer in the midst of a contentious divorce. Having a skilled divorce lawyer may be able to help the client understand their decisions and how they will impact their case.

Juan Luciano has spent his career in the complex legal world of family law. He has earned a reputation for excellence at the negotiation table as well as when in court. He is also fluent in Spanish. Contact us today at (212) 537-5859 to set up an appointment for a consultation with East Village, Manhattan divorce attorney Juan Luciano.